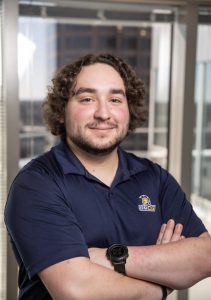 “Having a mentor was the most valuable part,” said Allan Kuylen, a 2021 participant of the Campus Greensboro Fellows Program.

When Allan started his internship at The Brooks Group, a sales training company based in Greensboro, he felt like a fish out of water. He had recently graduated with a Bachelor of Science in Biology at the University of North Carolina at Greensboro and his new position as a Virtual Programs Producer required utilizing skills he hadn’t honed in school. The mentor Allan was matched with through the Fellows Program had connections at The Brooks Group and was able to provide Allan with answers to questions he wasn’t willing to ask his supervisor.

“It was really nice to talk to someone outside of the company about things happening in the company,” said Kuylen.

Allan had learned about the Fellows Program through spotlights at UNCG’s basketball games and from friends who had participated in the program previously. Before participating, he was aware of what the program provided but didn’t understand it’s full impact until he was a participant himself.

“It was nice to be able to talk to other Fellows and see what their internships were about,” said Kuylen, “It was really neat to see them again downtown and already have a point of connection.”

Beyond the mentorship and networking, Allan found the workshops on finance particularly helpful. He still uses information from those sessions now that he’s moved into a full-time role.

Allan is currently a Senior Producer/Technical Project Manager at The Brooks Group. In this role, Allan is responsible for recruiting, training, supervising, and further developing the producer team. Additionally, he works with client-facing technologies by providing support to clients and internal departments, as well as utilizing the media production experience from his internship to assist with marketing projects.

Being a Fellow showed Allan just how great of a city Greensboro is to be a young professional in.

“I’ve lived a lot of places because my parents have occupations in law enforcement and the military,” Kuylen said, “Greensboro has felt the most like home.

It’s got a bit of everything,” He continues, “It’s the perfect size to have a bigger city feel but not too big to feel drowned out. The people are the nicest of anywhere I’ve lived. There’s lots of hidden gems that make me feel like here’s more to learn the longer I’m here.

About the Author: mmitchell